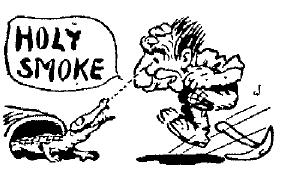 DETROIT, MICH. -- Everyone knows what to expect when the ground hog comes out of his hole on Feb. 2 and sees his shadow, but what does it mean when a red alligator comes out of a drain pipe in October, and growls at you?

That is what Nick Dippong, a laborer, is anxious to find out.

Nick was employed on an excavation job at 32 Monroe avenue [sic]. He uncovered a small tile and broke it open with his pick.

Nick didn't stop to explain what "it" was, but just breezed out of that basement.

Other workmen decided Nick's actions deserved an explanation, and they sought it in the basement. There was no mystery about it, however, for there near the tile lay the cutest little red alligator they had ever seen -- not that they had ever seen one before, for they were all sober, industrious men.

About this time Nick returned with the "boss," William J. Keegan, the contractor who had the excavating in charge. Keegan spent some time in Florida and knows all about alligators. Hence he was quite interested in a red one that growled.

One of the workmen with more temerity than the others thrust a pencil at their strange find and promptly conceived a deep admiration for the animal's dentistry, for the pencil was bitten squarely in two.

Keegan began humming softly and stretched out his hand. The alligator closed his eyes. Keegan picked him up gently and laid him in the palm of his hand, the while stroking the head and back.

"You poor little cuss," he said, "What are you doing 'way up here?"

"Carnegie," as he was named that on the spot, opened one eye and showed his teeth in a slow grin.

It has been recalled that a guest at a hotel about two years ago had two young alligators and that one escaped. It is believed that "Carnegie's" presence in the drain pipe can be accounted for this way.

His unique color -- a dull, brick red -- is to be explained by his two years' residence in the tile.